What exactly is e‑navigation? An overview of the journey so far

It is a term that is often come across when discussing shipping technologies but what exactly e-navigation is depends upon many things.

There is one definition of what e-navigation is that forms the basis for discussion and regulation at the IMO and that is “the harmonized collection, integration, exchange, presentation and analysis of marine information on board and ashore by electronic means to enhance berth to berth navigation and related services for safety and security at sea and protection of the marine environment.”

Some of the things mentioned have been practiced for decades and continue to evolve as new technologies are developed and equipment produced. Some of the terms as written might be open to different interpretations making acceptance of the goals of e-navigation a matter of suspicion. For example ‘protection of the marine environment’. No one would argue that ensuring a ship can safely navigate to its destination without grounding or worse will protect the environment as pollution incidents will be avoided. However, using the protection of the marine environment as a means of controlling ship speed and arrival times to suit demands for reduction of CO2 emissions over the commercial obligations of the ship and cargo owners will not help garner support for e-navigation from those who have the most invested in the industry. 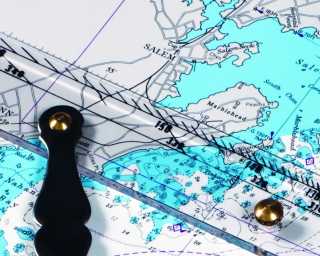 To understand what the potential of e-navigation is from the navigator’s viewpoint it is necessary to look back at how things have changed in the last 20-30 years.

With regard to the advances in navigation equipment, there have been many shipowners who have embraced almost every development and adopted the latest technologies such as radar, ARPA, GPS and ECDIS the earliest opportunity. Often this has been at more expense than is at first apparent.

Take ECDIS for example. Development of electronic chart systems dates back to the 1980s and systems were in use from 1990 onwards. The first ECDIS – as opposed to a simple ECS – to be given type approval was in 1999. That was three years before the IMO had accepted ECDIS as meeting the chart carriage requirements of SOLAS regulation V/19 in 2002 and 13 years before the carriage of ECDIS first became mandatory.

So long before the IMO had even developed performance standards for electronic chart display systems, there were shipowners who had purchased the equipment and the rudimentary charts then available and were aiding the early system makers in developing and evolving their equipment and pushing forward the technology. For these early pioneers, there was no mandatory requirement to invest and since the ships also had to carry, update and navigate with paper charts until at least 2002 there were only extra costs and demands upon navigators’ time.

ECDIS is not the whole of e-navigation of course. That much is evident from the IMO definition when it talks of collecting, integrating, presenting and analysing information by electronic means. Before ECDIS was officially recognised, the integration of navigational data and other information was being considered by the IMO under the Voyage Data Recorder (VDR) regulations.

Making VDRs mandatory was more about accident investigation than navigation but except in the most modern ships of the time, their installation brought together information from what had always been stand alone systems, Radar, gyro compasses, echo sounders, GPS, speed and many more. Today it must also take in data from the ECDIS but when VDRs were first introduced only a small number of ships were actually using ECDIS.

The 1980s and 1990s was a period of great innovation in navigation equipment that to some extent has been overlooked in today’s demand for more digitalisation. Prior to this time, most navigation equipment was stand alone and it was the navigator’s own brain that had to combine the data from disparate pieces of kit. Arguably ARPA with its plotting capability was the only system that actually did anything other than show a snapshot of available data. The 1990s saw the take off of integrated bridge systems (IBS) and the use of display screens. Integrated navigation systems (INS) closely followed IBS in newbuildings.

There is a deal of confusion over the difference between the two terms and many consider them interchangeable. The IMO however does have different definitions, an IBS is defined in Resolution MSC.64(67) and an INS in MSC.86(70).

Comparing the definitions shows that an INS is a combination of navigational data and systems interconnected to enhance safe and efficient movement of the ship, whereas IBS inter-connects various other systems to increase the efficiency in overall management of the ship. More specifically, the IMO definition of an IBS applies to a system performing two or more operations from:

By contrast the IMO defines three versions of an INS with each ascending category also having to meet the requirements of lower categories:

The two definitions do not have a common requirement as to the navigation element so it cannot be said that an IBS is an extended INS although many consider this to be the case. In fact the INS is the foundation for e-navigation.

Up to now all of this development was only available to and of benefit to the navigator on a specific ship but, with modern equipment and communications, it is possible for this information to be shared and that opens up a whole new set of possibilities.

The advent of AIS brought with it a limited amount of navigational information sharing to other ships but beyond this and the use of radio, there is no way of knowing what another ship is doing or intends to do.

At this stage, it is unlikely that many shipowners would want to give access to all the information that is being produced and used onboard to a third party without some regulation forcing them to do so. However, sharing information with the ship’s owner or charterer is a different matter.

Modern technology allows for an appropriately equipped ship and shore office to share data and information in real time on a continuous basis. Exactly what can be shared and how it can be displayed depends upon several factors.

It is possible to send the data that is being recorded on the VDR but that will need a means of display to be developed or sourced. The maker of an integrated bridge or navigation system can quite easily collate the data as is done by the bridge system and send it all back to shore where a mirror system can display what is visible on the ship’s own workstation screens.

Alternatively, where there may be different systems on board, a third party such as Navtor which specialises in developing equipment for navigation and shore use can provide the means to collect information from all the systems and the means to display it ashore. By choosing a third party it is likely that more customisation is possible. More importantly, Navtor can highlight that much of its equipment has been developed as a direct response to requests from custoemrs and potential customers.

The argument that navigators do not want head office spying on them from shore is not one that can be upheld. The master and navigators may have responsibility in the first instance but it is the right – and some would say the duty – of owners to better care for their assets and ensure safe practices. After the Costa Concordia disaster, many from within and outside of the shipping industry questioned why owners were not investing in systems for monitoring routine operations and possibly intervening in emergency situations.

Since then several owners have invested in just those sort of systems. It is fair to say that the majority of these are ‘premier league’ operators with large fleets who can afford to man shore centres on a 24/7/365 basis. Smaller operators may not be able to afford such an investment but as Navtor will stress, there are suitable options for almost every budget and the dividends in reduced fuel costs and fewer incidents could well return the outlay in quite a short time.