There is no need to panic about biofouling, ShipInsight’s conference heard last week from Dr Bev MacKenzie, technical and policy director at the Institute of Marine Engineering, Science and Technology (IMarEST). Unlike ballast water, “there is no scientific evidence that biofouling species cause collapses in biodiversity or extinctions,” she said. Nor is there any evidence that it has any impact on human health; unlike ballast water, which can carry pathogens and viruses.

IMarEST takes a keen interest in biofouling and runs a special interest group on the topic for its members. It is also a strategic partner to the IMO-led GloFouling Partnership, which is due to hold its first meeting in March, Dr MacKenzie said.

Asked to clarify whether she saw the risks of biofouling being limited to the fouling itself, or whether there are risks associated with creatures caught up within it, she said there is “even less evidence about the species carried within [the fouling].” With that background, “how do you make decisions based on a lack of scientific evidence?” she asked. 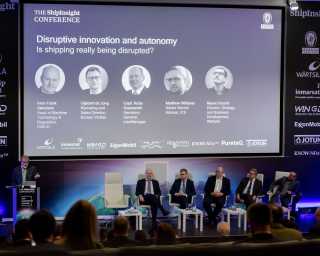 See the photos of the last conference and register your interest for the next one...

Dr MacKenzie later told ShipInsight that most animal species caught up in hull fouling do not survive long voyages because they are exposed to a range of temperatures and salinities along the way. And most of them do not stick to the hull, she said, so the only animals likely to be carried in hull fouling are likely to be worms, barnacles and slime.

She also drew a distinction between an ‘alien species’ and an ‘invasive alien species’. “Not all alien species will become invasive,” she said, so one of GloFouling’s tasks will be to conduct “the baseline studies that we really need to make decisions based on the best-available evidence,” she told the conference.

She did not deny that there could be significant risks from biofouling, however. Risk is defined as a function of the probability of something happening and its consequences so although “the probability of a fouling species causing harm may be very low, if it does [cause harm], it could be catastrophic.”

Unlike ballast water treatment, tackling biofouling has clear benefits for ship operators, she pointed out, thanks to the efficiency gains and emissions reductions achieved from having a clean hull and the other three speakers in the conference session focused on technologies that have been developed to achieve fouling-free ships.

Philip Chaabane is the chief executive of the Swedish company I-Tech, manufacturer of the antifouling ingredient Selektope, which has repellent effect on fouling. He said that optimising hull conditions across a fleet of ships can save up to 10% of fuel but “a lot of ships are sailing without optimised systems.” Yet to solve this, “we don’t have to invent too much, we just have to start using what’s out there,” he said, describing this as a lost “$15Bn opportunity” because of the increased fuel used.

He referred to what he called ‘pharma-grade’ regulation that has resulted in the number of biocides approved for antifouling use falling from more than 40 substances a decade ago to less than 10 now. Selektope, he said, is a pharma molecule and its use is the first time that such a compound has been applied in the paint industry to repel organisms.

Alongside him on the discussion panel was Ole Christian Troland, chief financial officer for ECOSubsea, which has developed technology that can clean a hull in the time available during a ship’s port stay without polluting the local water and without damaging the coating. “To achieve all three of those [goals] turned out to be a complex challenge,” he said. The technology has reached its fourth generation and he is hopeful that the system “is now at a level where we can roll it out in a bigger scale,” he said. A system is now awaiting installation in Antwerp.

He described the technology’s role as being part of “a biofouling value chain”, with the ship’s paint forming the first link in that chain. “When that fails, we come in as one solution.”

Stein Kjølberg, global concept director for Jotun’s Hull Performance Solutions, was also a panellist and he urged the industry to take a different view towards hull paint. It is seen as “a necessary evil”, he said. “It is rarely seen as an investment. It should be.”

Jotun was involved in developing ISO standard 19030, which relates to hull and propeller performance. It was published in 2016 and “is good for its purpose but can be improved,” Mr Kjølberg said. He described what he called “a path to maximum hull efficiency” that combines coatings with other efficiency techniques. “Coatings on their own will never be enough,” he said. For example, the hull’s surface might be well prepared before a coating is applied but after even a minor touch-up, there is a risk of increased hull roughness that could attract hull fouling when the ship is not sailing.

However, a significant influence on a coating’s performance is the customer’s specification, based on the ship’s expected speed, water temperatures and operational pattern. “99% of the time, that is wrong,” he said, and has to be corrected. Other parameters are also critical. For example, “if you have a vessel in shallow water and high seawater temperature, it will affect fouling.”

Among the questions raised by audience members was one that asked whether biofouling management should be addressed ship-by-ship, rather than by establishing enhanced antifouling schemes and standards.

Responding from the floor, Aron Frank Sørensen, head of maritime technology and regulation at BIMCO, spoke in favour of standards, saying that the organisation has created an in-water cleaning standard, in coordination with manufacturers, cleaning companies and shipowners. “Let’s work together [and] get the standards,” he said.

His support of standards was reflected in an audience poll, which asked delegates whether they believed biofouling was a subject that requires IMO regulation, as opposed to regional or local requirements: of those who took part, 81% believed it was a topic that needed IMO’s global approach.

HullWiper doubles down in Gibraltar

Hull efficiency will feature at the 2020 ShipInsight conference